To begin with, the International Academies of Emergency Dispatch explains that modern fire fighting did not start until 1830 in Edinburgh< Scotland.  Before that time, there were limited fire regulations and “fire wardens” who would police the town and inspect chimneys and such, fining people if they were negligent.  At this point in history, fire departments were basically a shed full of buckets that volunteers would try to bucket-brigade a fire out with elbow grease and community spirit.

Before the London fire department, cities would have watchmen who would sound a city alarm when fire would break loose, essentially rousing the volunteers and citizenry to face the nascent threat.  The first real, federal fire-fighting force were the Vigiles of Rome, formed by Agustus in 21 BCE.  It was originally a slave army had previously been used by Egnatius Rufus to privately fight fires.  Augustus inherited Rufus’ slave army and mixed in freedmen to create a squadron of cohorts with their own camp in each city where firefighting equipment was stored.  The vigiles would patrol the city, arresting arsonists and sounding the bells if they saw a conflagration.  Their methods were crude though, and oftentimes demolishing the building or its neighbors was their only means of dealing with the fire.

Augustus’s fire brigade may have in part been a response to the private fire brigade of Marcus Licinius Crassus, the wealthiest man in Ancient Rome.  Crassus had a talent for making money, in some cases in unscrupulous ways.  According to Plutarch, Crassus would go to places where houses were on fire and convince owners of neighboring properties to sell their homes to him before the fires landed.  After purchasing a huge number of those homes for a trifling cost, he would purchased slaves who were architects and builders and rebuilt the homes to flip for a profit.  (Plut. Crassus, 2:1, p. 317-18).  Here the story gets a little hard to trace, but somehow encyclopedias and scholars have glommed onto the idea that Crassus organized a private fire brigade of slaves and would go about Rome to assorted fires (there were a lot, cooking was all on a fire and the buildings were VERY flamable), and haggle with the homeowners over a price to put the fire out.  If the homeowner refused, Crassus would let the home go up in flames and purchase the charred rubble for cheap, sending his worker ants to rebuild it for him. Essentially, Crassus was making money hand-over-fist by selling fire services at a premium, and if the homeowner refused to pay for his services, he would simply purchase the burned out hull for pennies on the dollar (or..  pieces of sestertii on the sestertius) and make a profit on the land in a different way.  Unethical, yes; clever, also yes; did he ever send a slave to go ignite a fire purely to force a profit out of it, there is no evidence of that happening but it certainly feels like something he would do…

While it is difficult find the origin point of the Crassus fire-extortion story, (i.e. I can’t find it) it seems to be ubiquitous in many tellings of Crassus’ rise to fabulous wealth from simple, regular wealth.  In particular, the idea that city-run fire departments were a response to extortion by flame seems to find purchase in Crassus’ tale.

https://youtu.be/_Oscq4MfyEc (a solid video on Crassus’ rise to power)

Greetings to anybody who actually reads my blog and anybody who missed the relatively constant updates of 2015.  I’m back, in some capacity, and planning on writing some more stuff.  I had always planned on writing more, but then I started law school and the time I had slipped away a little more.  Excuses aside, at some point in the next several months, expect posts about Aztec hummingbird warriors, Cassius’ troll fire department, black legends, and the absurd exploits of Thomas Cochrane.  For now however, the only olive branch I can offer over the next couple months are chapters from my book Veni, Vidi, Didici.  In essence, they’re the same thing as the blog posts, if not slightly better researched.

Song of the Goats

The word “Tragedy” actually has Greek origins that translate almost directly into “goat song.”  The Greek word “tragos” means goat, and when paired with “oides,” the word where ode comes from, you are left with a loosely translated “ode of the goat.”  We honestly have no idea why tragedies are goat songs, but historians and folks believe it comes from the fact that winning a playwriting contest at a festival of Dionysus, the god of drunkenness and wine, would earn you a goat.

“Let me sing you the song of my people…”

Dionysus was also known as Bacchus, the more Romanized title for the same god.[1]  Belief is that the Bacchus was a Thracian fertility god that was snapped into Greek culture as a cult “before the beginning of historical times.”[2]  It became a cult revolving around wild practices of eating wild animals raw and midnight dances in the hills while drunk in a Bacchic ritual called “enthusiasm.”  Enthusiasm, etymologically, means to be possessed by a god and to be in ecstasy.[3]  The Dionysian cult grew over time until it was assimilated into the religion of the Greeks with Dionysus as one of the semi-major gods.

Depending on the story, either Zeus or Dionysus had a son named Pan, the half satyr, half god.  This is where things get a little interesting and a lot goat: Pan was originally a god of the Arcadians, worshiped as a fertility god by the poor farming communities there and adopted into the Athenian pantheon sometime after the Persian war.[4]  Pan’s symbol was the goat, possibly the connection between Dionysian festivals and goats.  Peasants would erect a statue to Pan in their town that looked like a goat and were said to physically beat the goat statue whenever food was scarce.  These ancient Greek farmers and shepherds were thought to have used the goat as their symbol because they were unable to afford the bull that would normally be used as a sacrificial animal at festivals.[5] 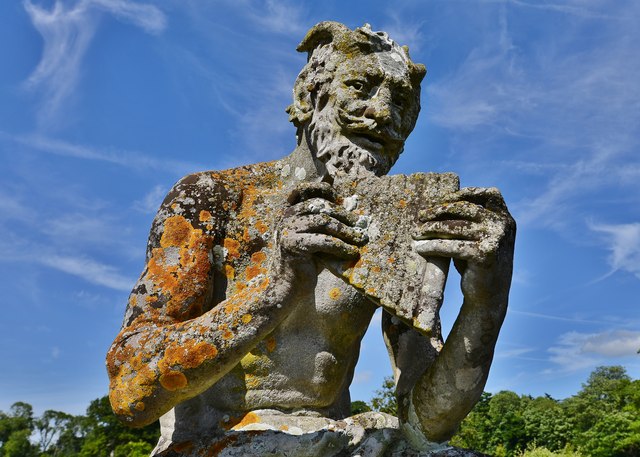 No joke, you look up “Pan Goat” and you get images of some very odd statues..

[1] The Romans were well known as borrowers of other religions.  They would assimilate rather than conquer, part of the grand success of their empire.  Much easier to let people join you than to fight them.

[3] The word is derived from entheos, “en” means “in”, while “theos” means “god” (think en masse and theology)

[5] Even the gods can’t escape the pull of thriftiness.

In Ancient Greece, boxing matches would go on until one player tapped out or was incapacitated.  A knock out, a busted limb, in rare cases death,[1] whatever it took to end the match was what ended it, however fatal strikes were punishable and forbidden.  By the time of Homer, roughly 750 BCE, boxing already had a style and a system of rules that prevented strangling and kicking.[2]  Sources differ on the legality of open hand blows, with some saying that “spear-hand” strikes were legal or at least not something that disqualified the athlete,[3] while others say that closed fists were required and that any blow below the neck was an illegal strike.[4]   There were no rounds, there were no points, and there were no weight classes.

In Greece, this was basically the ONLY way to end a boxing match.

The boxers would wrap their hands in leather straps, both to protect their arms and to protect their opponents, intending to deaden the blows and prevent death or broken arms.  They would otherwise be stark naked when boxing and wrestling.  Most of the images that we have of Greek boxing show the athletes swinging with their right hand and generally using the left hand as a “feeling hand,” a means of obscuring the opponent’s vision or grabbing their face.  It is possible, if not likely, that the Greeks simply did not appreciate the idea of a Southpaw and did not train boxers to utilize their left hook.  Boxing matches would be held on the third day of a festival, dead center of the festivities, at midday, precisely the middle point of the hoopla.  Pairings would be drawn by lot, and matches would progress from there.  It is thought that there was no boxing ring because the Greeks expected boxers to stand their ground and not retreat when fighting.  Therefore, the two men would stand facing one another and wail on each other until somebody dropped.[5]

[1] There are 4 known and remembered deaths in boxing, also one from wrestling although death from the sport was far more accidental in the wrestling match.  A couple of the boxing deaths were thought to be intentional.

[2] Nigel B. Crowther argues in The Evidence for Kicking in Greek Boxing, (The American Journal of Philology) that Eusebius explained that donkeys would make powerful boxers, making the assumption that kicking is involved.  He does however also present a counterpoint that in Theocritus’ writings, “fighting with feet” and “boxing” are different Greek words.

[3] Robert Brophy and Mary Brophy, Deaths in the Pan-Hellenistic Games II: All Combat Sports, in “The American Journal of Philology, (The Johns Hopkins University Press, 1895).

[4] Brophy writes that the rules of boxing forbid any body blows other than the head and neck.