There is a five acre quarry beneath the Muslim quarter of Old Jerusalem.  Known as Solomon’s Quarry, Zedekiah’s Cave, Zedekiah’s grotto, the Royal Quarry, and even at one point the “Cotton Cave”, the vast underground network of hewn rocks contains a significant amount of Biblical and historical significance.  The entrance to it is under the North wall, roughly 500 feet from the Damascus Gate (people can tour it now, Sunday through Thursday).

Biblically, the caves are supposed to be the caverns where the stone was mined to create Solomon’s Temple.  The main reason why the belief exists that it was the source of the Temple’s stone comes from a Bible reference in 1 Kings 6:7 which explains that there may be no iron tool used nor heard within the temple grounds.  So a rock quarry some several thousand or so meters from the Temple grounds made it the perfect staging ground for dressing and finalizing the shape of the rocks before dragging them to the building site.

Later stories explain that when King Zedekiah was running from the Chaldeans, he took the caves because there was a direct route to the “plains of Jericho”.  The story is that God busted open the cave mid flight and Zedekiah was captured (his sons killed in front of him and his eyes gouged out, old Bible stories rarely end without blood).  If you visit the caves today, you find that there is actually no true end to it.  It is purely a cave, not a tunnel, so there is actually no route to Jericho save a small stream that bursts from the wall on one end known as Zedekiah’s tears.  Legend has it, he cried as he fled and where his tears struck the ground, the stream burgeoned from the rock.

As far as more recent history of the Cave goes, when Jerusalem was under the control of the Ottoman Empire the cavern was used to store wool because it was out of the elements and not being used for much else.  During that time it was known as the “Wool Cave” for obvious reasons.  In 1540, Suleiman ordered the cave sealed when he was rebuilding the walls of Jerusalem, likely to prevent invaders from using it to undermine the city.  There it remained sealed until 1854, when an American doctor was walking about with his son and his dog.  His dog caught a scent and started digging, partially unearthing the entrance to the Caves. 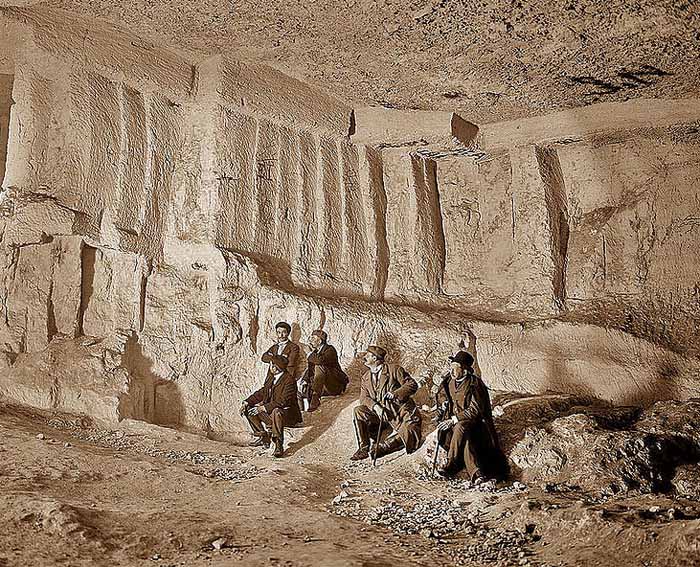 Since that time, Freemasons end up using the Quarry for rituals once a year or so, and quarried out stones in the 1940s to serve as cornerstones in Masonic lodges across the world.  People come and visit the Grotto from time to time with different expectations; some legends hold that when the Roman legion laid siege to the city, the priests of the Temple hid the golden implements and tools somewhere deep in the Quarry.  In more recent years, the Quarry gained some popularity because of a man’s claim that he found the Ark of the Covenant deep within the mine.  His argument was that directly below the point where Christ was crucified, the blood spilled deep through the ground and in a divinely circular way, landed upon the Ark in the mines below.  His claims had no evidence backing them, and the occasional reddish limestone in the cavern likely just sparked his belief that he had found the blood of Christ within a holy place.

In the early 1940s, an experiment in military intelligence began that has since found a spot in American folk legend.  American military officials were scrambling to create codes to use because the Japanese intelligence corps was breaking all the codes they had.  An officer named Philip Johnston brought up the plan for using the Navajo language as the baseline for the code because of the difficulty and obscurity of the speech patterns.  Johnston had grown up in Navajo communities as the son of a Protestant Pastor and spoke the language fluently, so in 1942 he proposed his idea to the upper brass of the Marine corps.

There was a general distrust of using native languages for codes because during World War I, the Americans used the Choctaw language as a code.  German spies had been sent to the United States during the 20s and 30s posing as anthropologists with the intent of recording and deciphering the native languages of the United States.  For unknown reasons, the Navajo language was not recorded and their language became one of the most effective and difficult to break codes of the Second World War.  Some 29 young Navajo men trained to decipher and write their own version of a code using the Navajo language, being sent out in units of two, one to listen and one to code and decode new messages.

The baseline of the code was to spell out words using the first letter of the English translation of a Navajo word.  Navy became: Needle – Ant – Victor – Yucca, which was “tsah” – “wol-la-chee” – “ah-keh-di- glini” – “tsah-ah-dzoh”.  The complexity of the code came from the fact that it required fluency in two languages, one of which exists to a large degree only in Arizona.  Navajo code speakers would agree upon several words to use for different letters and different objects (submarines became “besh- lo” which meant Iron Fish) and would memorize the words.  The code language was worlds faster than machine decoding and was extremely effective at giving short bursts of information in the heat of battle.  Each of the Marine corps units had a detachment of Navajo soldiers who were their code speakers.  Early in their stint, the Navajo speakers were seen with disdain by other Marines because they spoke a foreign language that non-Navajo could never understand, but after several successful excursions, the Navajo windtalkers were seen as an essential part of the Marine corps.

As a testament to their success, many officers at Iwo Jima have made the statement that they would never have succeeded if it were not for the Navajo code speakers and the Japanese chief of intelligence, Lieutenant General Seizo Arisue explained after the war that they had broken the codes of the American Navy and the Air Force, but they never succeeded in cracking the Marine codes.

As a final word about the Code speakers, In June of 2014, Chester Nez, the last original Navajo code speaker, died at the age of 93.  There are however numerous interviews and conversations recorded with the speakers, so their story lives on in archives and books.

Learn how to speak Navajo:
https://www.youtube.com/user/daybreakwarrior

Basically every mammal with ears has it.  The weirdly gooey substance that slowly eeks its way out of the ear canals throughout the day turns out to be much more than an obstacle to hearing.  At the baseline, Ear wax is secreted by modified sweat glands and sebaceous glands.  It comes out in a loosely wax state, measuring around 60% Keratin (same stuff in your hair, nails and in animal horns), 12%+ of Fatty acids and alcohols, and 6ish% Cholesterol (the good kind, not the one that gets stuck in the veins).  The purpose of it is to clean out the ear canal as well as to seal it against water, bacteria and insects.  Without the thick layer of wax blocking the pathway into the ear, it is thought that infection and infestation would be substantially more of an issue.  Earwax itself actually gets produced several layers into the ear canal and is pushed forward in the tube largely by the motions of the jaw.  In essence, the motion of the jaw bone squeezes the cerumen (wax) deeper down the tube until it squirts out into the ear.

Ear wax is actually a genetic trait as well.  It has been found that people of European and African descent predominantly have a variety of earwax known as “moist type” cerumen (brownish golden goo of a roughly honey viscosity.  It’s wet, it’s wild, it’s genetic.)  Whereas Asian and Native American people are found to have “flaky type” cerumen. (looks more like small sheets, it’s more gray and dry.)  Following earwax types has actually been a method anthropologists have used to trace the migration routes of human cultures.  For example, wet type earwax is more common in a specific people within Japan, likely because of a migration of wet type people thousands of years ago who settled in among a flaky earwax majority.

The first real mention of medical treatment of excessive earwax was in a Roman text in the first century by Aulus Celsus.  He wrote about a smattering of ways to cure earaches, each with a special tincture that one needs to squirt into the ear.  No joke, there are at least a half dozen that include grinding up flowers, adding it to honey, possibly adding some radish, and then syringing it directly into the hole.  In my personal favorite example, he writes, “hot oil is poured in, or verdigris mixed with honey or leek juice or a little soda in honey wine. And when the crust has been separated from the ulceration, the ear is irrigated with tepid water, to make it easier for the crusts now disengaged to be withdrawn by the ear scoop” (De Medicina, Celsus, Book 6, 7:7)

For those of you wondering, The above image is of a Roman ear scoop. Basically a knife you wedge into your ear.

The treatment for heavy earwax hasn’t moved too far from the old Roman ways either.  Most treatments for too much earwax are somewhere along the lines of “irrigate heavily until better”.  In one particular moment of creativity, humanity decided the perfect response to giving your ear an enema would be to do the opposite; thus was ear candling born.  Basically described as “alternative medicine”, ear candling is the quack’s approach to ridding a patient of earwax through the reverse of irrigating with water: by using fire instead.  A tube made out of wood of some sort is placed inside the ear, the “doctor” (intentional quotations there) then lights it on fire and allows the flame to burn for a while, at which point the ear candle should have sucked out the impurities and waxes, likely it balances one’s auras as well.  Since 2007, medicinal experts have made it explicitly clear that ear candling is a bad idea.  On two occasions people have lit their homes on fire, one caused death, and on most other occasions, the ear candle just ends up dropping hot ashes into the ear canal rather than siphoning out the badness that it was intended to.

If you learn nothing else, just remember never to put fire INSIDE your ear.

http://en.wikipedia.org/wiki/Ear_candling  (seriously.  This exists.  It’s worth a giggle)